In seeking to create the ultimate luxury grand touring sedan, the design team was tasked with coming up with a totally new character for the Flying Spur, one that was much more modern, powerful and elegant. The result is an athletic, all-new design on an entirely new platform.

The new platform allowed Bentley engineers to extend the wheelbase by an impressive 130 mm, moving the front axle further forward. From a design perspective, this increased the so-called ‘Prestige Mass’ – the visible area of sheet metal between the front door shutline and the wheel - bestowing the new model with its unique, more dynamic character.

Based on a modern vision that is unmistakably Bentley, the Flying Spur now has an increased road presence and sleeker, more muscular lines that sweep over the haunches and the full length of the car. These key signature lines define the profile, as the power lines emerge from between the headlamps and then spear on through the doors, where they gently fade out.

The self-confident, sculptured expression of the profile and silhouette is complemented by new 21-inch wheels that are offered as standard, as well as the option of two further 21-inch wheel designs and one unique, 22-inch Mulliner Specification wheel.

Making a bold statement at the front, a retractable Flying B mascot adorns the bonnet for the first time on a modern-day Flying Spur. In Bentley’s Centenary year, the iconic mascot has been restyled for the next century. Electronically deployed and illuminated, it is linked to the welcome lighting sequence and keyless entry system as the driver approaches the car.

The imposing radiator matrix is finished in gloss black, with bright chrome surround and vertical vanes that hark back to the 1957 Bentley S1 Continental Flying Spur. The lower matrix can be specified in either black or bright chrome. 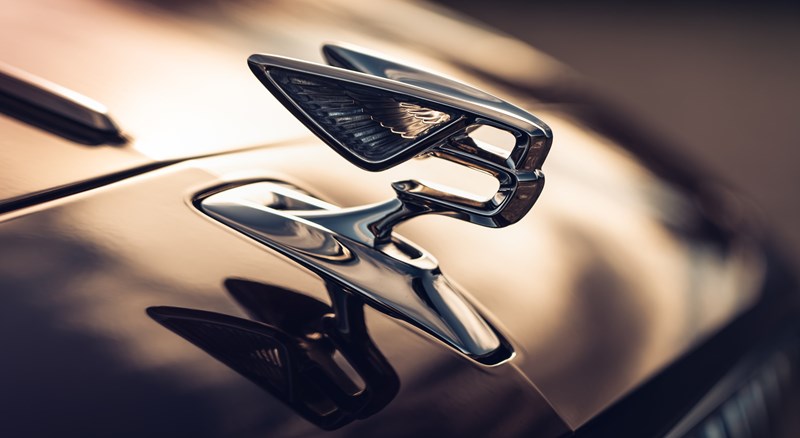 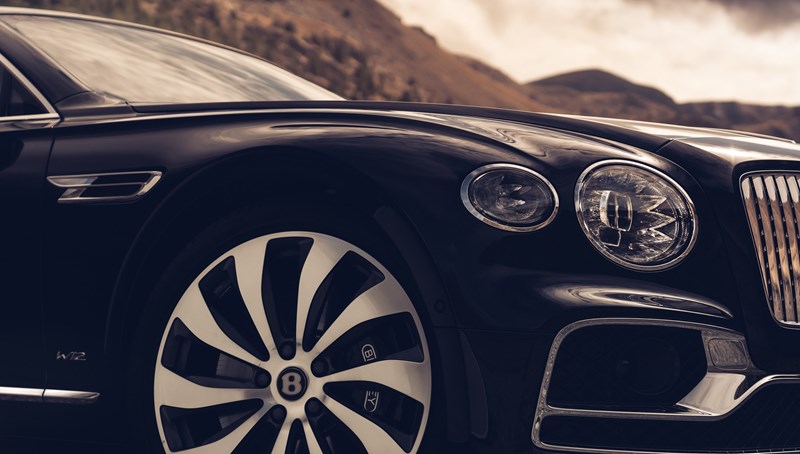 State-of-the-art LED matrix headlights are standard, allowing the driver to operate on main beam all the time, automatically cutting a hole in the beam around oncoming vehicles to avoid dazzling other drivers. Matrix headlights feature unique, cut crystal effect detailing. A chrome sleeve has been added behind the cut element making them sparkle, even when not lit.

The elegantly proportioned, tapered rear of the Flying Spur has been designed specifically to feature the written ‘Bentley’ script beneath the traditional winged ‘B’ motif. The rear, wrap-around lamps utilise the familiar, Bentley ‘B’ graphic and also display a cut crystal effect. Large, twin chrome tailpipes hint at the power of the W12 TSI engine underneath the hood.

Inspiration for the exterior design has been drawn from fuselage surfacing in aviation. The all-aluminium exterior panels have been crafted with incredibly sharp undercut lines and flowing surfaces, thanks to Bentley’s ‘superforming’ technology, which was originally developed to create muscular fenders.

The rear body-side panel is the largest superformed panel in the automotive industry and involves flat sheets of aluminium heated to more than 500oC, before each part is cut to shape by a high-power laser. The process was first proven on the Bentley Continental GT. The resulting haunch, which is now separated from the power line, gives the car a far more potent stance.

As a result of this lightweight structure, the new Flying Spur is 38 kg lighter overall than the previous generation model, despite the addition of vastly improved technological features in the car.

Bentley has utilised the latest technologies in aluminium extrusions and castings, alongside high-strength steels for the new Flying Spur, offering best-in-class body stiffness that optimises both handling and rigidity.

Standard paint options for the Flying Spur extend to a class-leading portfolio of 17 Bentley colours, carefully selected to complement the character and lines of the car. Blackline specification is also available as an option, transforming further the look of the new Flying Spur.