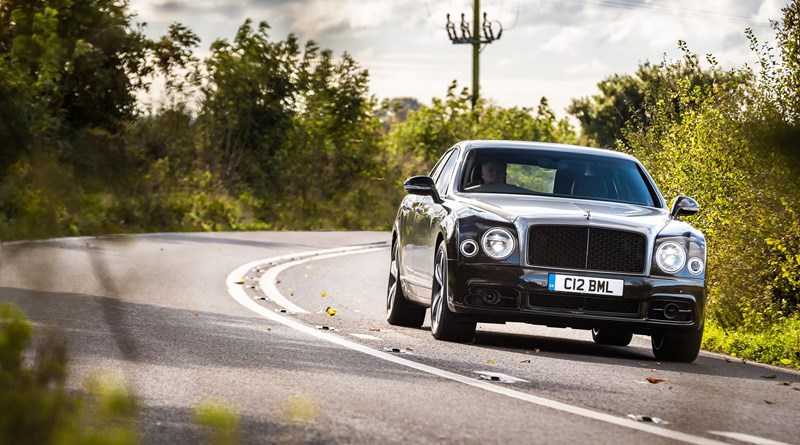 MULSANNE MAKERS: THE MASTER CRAFTSPEOPLE BEHIND 'THE GRAND BENTLEY'

(Crewe, 31 March 2020) After nearly a decade as Bentley’s flagship model, the Mulsanne will soon complete its production run and pass its torch to the all-new Flying Spur. Before then, and while the factory is shut down due to the ongoing global crisis, Bentley is celebrating the unmatched skills and expertise of the master craftspeople behind the ultimate luxury sedan. Production of the Mulsanne was due to finish in April, but has now been extended so that the final cars will be handcrafted when the Bentley workforce returns to the Crewe factory after the COVID-19 crisis.

The Mulsanne is handcrafted from the ground up in Crewe, where it was also designed, engineered and developed - from initial hand sketches through to final production sign-off. Over 7,300 examples have passed through the hands of the Mulsanne Makers, each car requiring over 400 hours of supreme skill and attention to detail to craft.

The Mulsanne Makers encapsulate all that the Mulsanne represents; unrivalled dedication to engineering and producing a sector-defining sedan with the use of traditional skills and materials, culminating in the ultimate combination of luxury and performance. Here, Bentley is profiling eight of them from across the business, who together represent a snapshot of the hundreds of people that took Mulsanne from the drawing board to reality and those that will continue to handcraft the Final Series of these remarkable cars when Bentley resumes production.

Crispin is able to claim Mulsanne as one of his own. As a member of Bentley’s Exterior Design team, Crispin was responsible for what we all now recognise as the unmistakable Mulsanne shape. Crispin now continues to work on the Design Production of Bentley’s future models, seeing designs through from free-hand sketch to superformed metal.

“I worked on the Exterior Design of the Mulsanne since the project’s inception. I was involved in the initial ideation through to full scale clay model development and final production development.

“For me the Mulsanne will always be one of the projects that I am most proud of. Over time the Mulsanne has become recognised as a modern icon, quite unlike anything else on the road.”

“It’s the Bentley to be made on its own unique rear wheel drive platform and the last car to use the 6.75 litre V8 engine. As such it can trace its lineage back through generations of classic Bentleys. It truly is the end of an era.”

Peter Guest was the Head of Body & Trim for the Mulsanne project, and was responsible for the engineering of the entire body structure and all of the cabin. Since completing the Mulsanne, Peter became the Product Line Director for the Bentayga – taking that project from initial conception through to delivery, before moving across to do the same role for the Continental GT and more recently the Flying Spur.

“The Mulsanne was extremely ambitious in its engineering – with an all-new body structure, electrical architecture and interior and exterior designs, together with a heavily re-engineered chassis and engine. A huge amount was done in-house by a team of around 600 engineers, who worked together with the teams that would ultimately build the car in Crewe. The body, for example, has a massive hand-brazed seam across the D-pillar – it was the best way to create a “hewn from solid” appearance.

“The interior was all-new and extremely complex, featuring several hundred pieces of leather trim and a perfectly aligned “ring of wood” that encircled the cabin. Again, we had to work with the craftspeople in the factory to ensure what we engineered could be made in production. It was a massive challenge, but we delivered – and the car still looks phenomenal today.

“Every time I see a Mulsanne leave the factory, it gives me an enormous sense of pride. When we launched the car it was known as the Grand Bentley – a perfect name for our ultimate grand touring limousine. There’s now a passing of the torch from Mulsanne to our latest Grand Bentley – the new Flying Spur, and as someone who lived and breathed the development of both cars, I can tell you it’s a worthy successor.”

Ian worked within Bentley’s Body in White department as one of the company’s many craftspeople, and was responsible for the hand-finishing of Mulsanne bodies of all variants. Ian will now move on to deploy his unique skillset in Bentley’s Manufacturing Bentayga Launch team.

“I’ve spent more than eight years of my career at Bentley crafting Mulsanne bodies for customers across the world. During this time I learnt and developed traditional skills of metal finishing and panel beating techniques, using a range of hand tools and files, ensuring each body meets the highest of standards before being transported to our Paint Shop.”

“I truly am proud to say I was part of a great team that worked on the brand’s flagship car for many years. It represents the end of an era, but I’m sure it won’t be forgotten.  It is something I will always talk about.”

Rob is one of Bentley’s longest standing colleagues, and will soon retire after over four decades of valued service. As a Series Planning Manager in Bentley’s Paint Shop, guiding a team of over 40 colleagues, Rob has not failed in passing on the expertise.

“This is my 40th year at Bentley, and to have been part of the Mulsanne story from start to finish is of great personal pride. I have taken responsibility for every Mulsanne body that has passed through our Paint Shop since 2009.

“The Mulsanne for me is the perfect combination of our Bentley heritage and our transition into the modern volume age. Some of the bespoke colours we have crafted for Mulsanne have been truly spectacular, especially the bespoke satin finishes and a stunning metallic we created called Liquid Mercury.

“Mulsanne has been our flagship since launch and will be hard to replace, but the new Flying Spur is definitely an appropriate heir in all that it does.”

John is another of Bentley’s longest standing colleagues, working his way up through the Wood Shop to now head the department. There is little John does not know about the veneers and handcrafting techniques behind Bentley’s industry-leading wood interior finishes. Beyond Mulsanne, John leads the way for Bentley’s Wood Shop, passing on his knowledge to Apprentices beginning careers of their own in the department.

“Mulsanne is certainly a Bentley that I have a significant personal connection to, having worked on the car’s wood components since its launch.

“Formerly, I was a Production Manager within the Wood Shop, planning and implementing the many handcrafted processes which were required to deliver the interior ‘ring of wood’ – a centrepiece of the Mulsanne’s interior that cocoons both drivers and passengers. It’s a true work of art produced using the finest natural materials and unmatched care and attention.”

“A personal highlight for me is working with the many customers who visit the factory to spec their cars. They are mesmerised by the detail, complexity and hand craftsmanship which makes every car unique”

Tim has extensive experience of working on the Mulsanne’s iconic ‘L-Series’ 6.75-litre V8 engine – also utilised in the Bentley Arnage and Brooklands under his watch. Developing Cylinder Deactivation for the first product in Volkswagen Group, Tim helped pave the way for the standard set by the Mulsanne. Now managing Engine Calibration for all of Bentley’s V8 engines, Tim’s expertise will not be lost.

“I feel very proud to have had a big input in defining the Mulsanne we all know and love. The Mulsanne was the first all-new car I had a hand in developing for Bentley after joining the company in 2005. The Mulsanne defined the ultimate Bentley to me – a modern reinterpretation of all the attributes that made classic Bentleys so special. Our characterful engine is a huge part of that, and we delivered that iconic Bentley ‘wave of torque’ with a totally reengineered engine that met all modern emissions standards.

“So it’s especially poignant for me to say goodbye to the 6.75 V8. The engine is a true icon, with the ‘L-Series’ first put into production back in 1959. I’ve been part of a team that has developed and refined it over many years, and it will be truly missed. We put the heart and soul of Bentley into each of its eight cylinders – and we’ll continue to do the same with our new engines now and in the future.”

Donna will be witness to key moments of the Mulsanne’s life cycle; both its pre-production development, and soon the assembly of the final example. Now managing the operations of the Mulsanne’s assembly processes, Donna is responsible for ensuring that all of Mulsanne’s handcrafted components are successfully drawn together as one cohesive part.

“My relationship with Mulsanne began in 2008, when Bentley first began to develop pre-production examples of the car. During this time I worked as a Senior Production Quality Manager, ensuring all prototypes met the highest of quality standard as we demand all Bentleys adhere to.

“I’ve now been lucky enough to be part of a team that sees all of the skills of my fellow Mulsanne Makers come together in the form of a complete car. It’s very satisfying to see, and I have never tired of seeing hundreds of examples roll out of the factory gates in Crewe.

“There is no doubt in my mind that Bentley achieved the ultimate in luxury with each and every Mulsanne it has produced.”

Hans joined the Bentley family in 2007 as a Marketing Product Manager for Mulsanne, and admits he hasn’t been able to stop looking at the Mulsanne since. As a voice of the customer, Hans ensured that as a whole business, Bentley designed, engineered and built a Mulsanne that customers truly desired. Hans now leads key Marketing projects for new Flying Spur and future products.

“Mulsanne has been the most fulfilling project of my working life.  When you’re dealing with a car at the very pinnacle of the automotive world, it starts to transcend into the world of art.  It’s no longer just a car. As a Product Manager you are able to introduce materials, crafts and features that other car makers couldn’t even dream of, such as solid stainless steel brightware that is hand-polished for ten hours, to name but one.

“I will always remember revealing the facelifted Mulsanne family, especially the Mulsanne Extended Wheelbase, at the 2016 Geneva Motor Show to a completely unsuspecting audience and seeing the tremendous response.

“Mulsanne is a snapshot, a moment in time that won’t ever come again.  It’s the end of an era and the last of its kind.  For me, it marks the culmination of our first 100 years work and everything we’ve learned during that time.  Now we’re very much into a new chapter.” 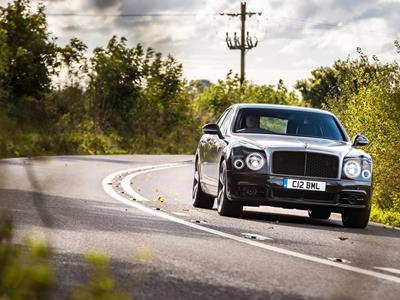 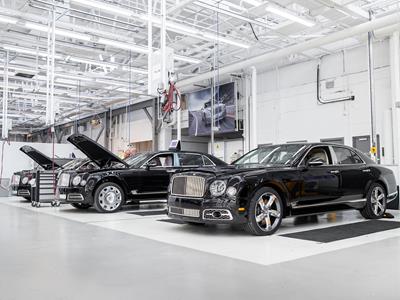 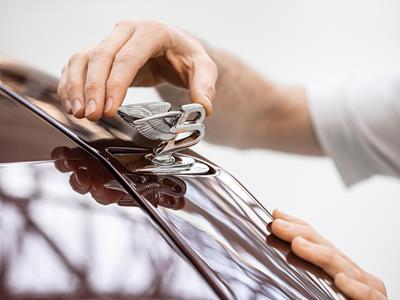 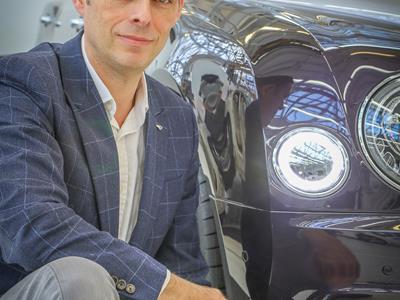 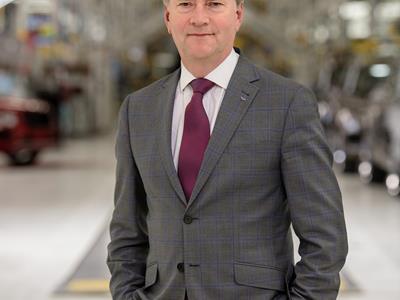 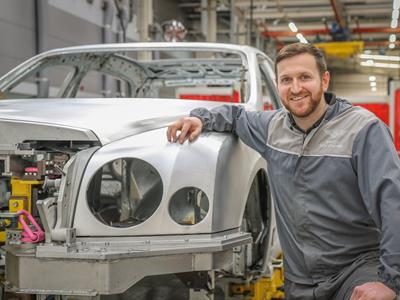 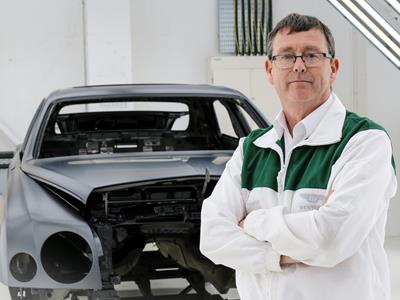 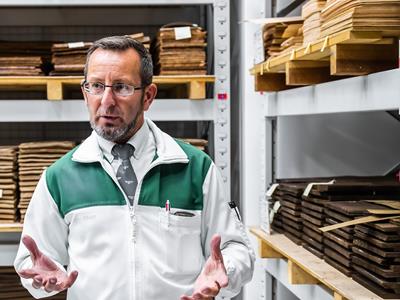 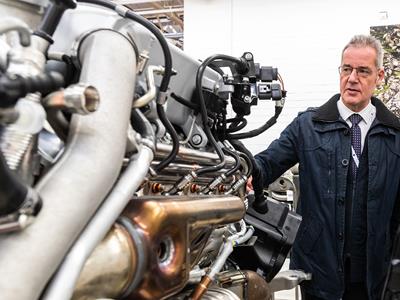 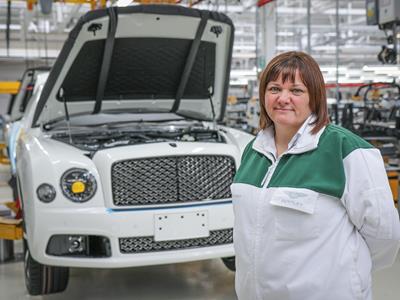 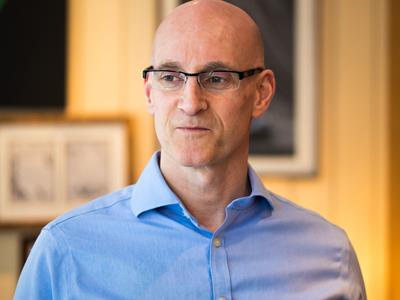