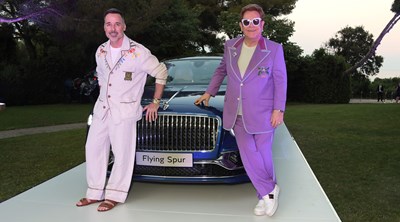 The Gala was held at Villa Dorane, Cap d’Antibes. Proceeds raised will be devoted to the work of the Foundation and its global programmes to combat AIDS. The Gala was hosted by Sir Elton and David Furnish, Tania Bryer was master of ceremonies and there was a special guest appearance by Chris Martin of Coldplay.

Sir Elton John, who was in fierce competition with the anonymous bidder himself, said: “It’s because of the consistent support and kindness of so many people in this room that we are able to commit the Elton John AIDS Foundation to real partnerships with world leaders that can a make a future without AIDS.”

With astounding attention to detail, sculpted surfaces and intelligent technology the Flying Spur First Edition, limited to just 12 months of production, is rare, collectable and incredibly luxurious.  Taking the driver on a journey of constant discovery this collector’s car inspires the imagination with its elegant form and intuitive interaction.

Sir Elton John and David Furnish hosted the star-studded fundraising event and welcomed regular supporters of the foundation together with luminaries from the worlds of music, film, entertainment, fashion, the arts and philanthropy. Guests gathered for a cocktail reception, dinner and live auction which were a highlight of the summer season in the Côte d'Azur and a perfect opportunity to showcase Bentley’s sensationally dynamic and sophisticated new model.

To celebrate Bentley’s Centenary year, and to support the Gala, Bentley is inviting the new owner of the Flying Spur First Edition to create their own bespoke and completely unique car through Bentley’s exclusive Co-Creation Luxury Service, offered only to a tiny selection of clients. This is a chance to define personal luxury in a car of unrivalled performance.

A member of Bentley’s Design Team will work with the winning owner, either at the headquarters of Bentley in Crewe, England, or in their own home, to create a truly personalised Flying Spur from a wealth of available exterior and interior options.

For the new owner of a Flying Spur the choices are virtually limitless – from exterior paint colours to interior leather and trim combinations and personalised seat stitching. The auction is a once-in-a-lifetime chance to go on a fantastic journey to create the car of your dreams.

With an acceleration rate of 0-60 mph in just 3.7 seconds this world-leading sedan delivers extreme power and agility, through an Active All-Wheel Drive System and All Wheel steering that ensures maximum sure-footedness and an engaging driving experience on demand.

Performance is a crucial part of what makes the Flying Spur First Edition one of the world’s most dramatic and captivating cars, delivered via a state-of-the-art W12 engine, with its relaxed yet seemingly endless power delivery. An 8-speed ZF dual-clutch transmission maximises smooth acceleration and quick gearshifts, delivering improved fuel economy and efficiency.

Sir Elton John created the Foundation in the US in 1992. Since then, through the generous support of far-sighted individuals, philanthropic institutions and corporations, the Foundation has raised more than $450m globally to challenge discrimination against people affected by the epidemic, prevent infections, provide treatment and services, and motivate governments to end AIDS. It has reached millions of people across 26 countries with the support, care and information to save lives and prevent new cases.

Bentley is delighted to support the Elton John AIDS Foundation Gala and looks forward to meeting the winning bidder of the Flying Spur First Edition.

About the Elton John AIDS Foundation
At EJAF, we believe AIDS can be beaten. We act on that belief by raising funds for evidence-based programs and policies, and also by speaking out with honesty and compassion about the realities of people’s lives. Sir Elton John created EJAF 27 years ago. Over the last quarter century, through hard work and with the help of our network of kind and generous friends and supporters, the foundation has raised more than $450 million globally to combat stigma, prevent infections, provide treatment and services, and motivate governments to end AIDS. This work has reached millions of people in Africa, Asia, Europe and across the United States. Join us in speaking out, taking action, and contributing to our efforts to achieve a world without AIDS. For more information, please visit www.ejaf.org. 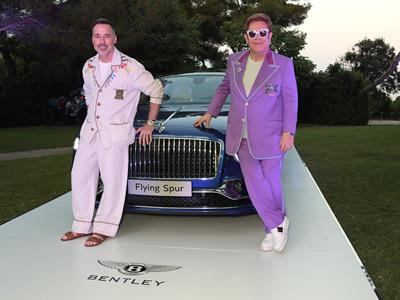