It could have been a driving event for selected publications in Berlin. Three Bentley Continental GT V8s were ready and waiting to hit the road. Then the coronavirus restrictions came into place.

Our Bentley European team creatively improvised and opted for an innovative content experiment. The idea: three publications, one from Germany, one from Austria and one from Switzerland, creating and coordinating their own story remotely out of the home office – without ever having to set foot in Berlin.

The new Bentley Continental GT V8 for a driving event in Berlin - under normal circumstances, journalists from all over Europe could have come to test-drive the new model and afterwards receive beautiful images for their stories. Swiss daily newspaper Blick, Austrian men’s magazine Wiener, and German car-and-culture magazine ramp would have signed up. Unfortunately, this event could never have happened.

In a solution that was as unconventional as it was creative, our European team connected each publication with a Continental GT V8 – two Convertibles and a Coupé – and each with their own photographer in Berlin. The journalists had the opportunity to brief their photographers in advance and stay in touch with them via mobile phone during the whole production of their respective story. The idea was to create three individual stories but all in the same city, whilst observing local social distancing guidelines.

What approaches and ideas would the three magazines develop? While the basic setup was the same for all three publications, the stories ended up being completely different.

Wiener chose a completely different approach. They took their inspiration from the legendary French short film C’était un rendez-vous by Claude Lelouch, a film shot in a single take through the empty early morning Paris streets back in 1976, resulting in an array of beautiful dynamic images in their Dragon Red Continental GT.

Ramp took to all the famous landmarks of Berlin, before inviting Wladimir Kaminer, the author of Russendisko, and also working from home in Berlin, to test-drive the Monaco Yellow Bentley Continental GT Convertible and share his thoughts.

The three stories might have been completely different, but the feedback from the editorial teams following the shoot was the same: the experiment was lots of fun, it also worked better than initially expected and the results were impressive. This could definitely be a creative template for future publications.

Nothing can compare of course to testing and experiencing a Bentley as a driver in person.

View & download the beautiful images from each photo shoot in the gallery below. 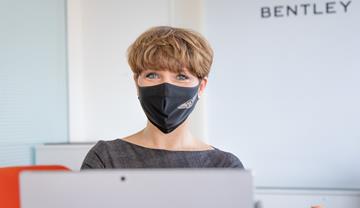