The Mulsanne Turbo of 1982 revived the Bentley marque as motoring magazines hailed ‘the return of the Blower Bentley’. Its successor, the Turbo R, was introduced in 1985 with significant improvements to handling and roadholding. It was a major success, lasting nine years in production.

With acceleration that rivalled exotic Italian sports cars and luxurious accommodation for four people, the Turbo R gave Bentley a unique identity and appeal. Its 298bhp V8 was unaltered from the Mulsanne Turbo, but the real transformation came in the chassis specification. Engineering Director Mike Dunn briefed his team to give the Turbo R a 50% increase in roll stiffness. To achieve this, new anti-roll bars were 100% stiffer in front, 60% stiffer at the rear. Firmer shock absorbers were fitted, while a Panhard rod in the rear suspension sub-frame further improved lateral stiffness. Cast alloy Ronal wheels with Pirelli P7 tyres delivered a small reduction in unsprung weight. It was suggested at launch that the ‘R’ in Turbo R stood for ‘Roadholding’, though this was never officially confirmed.

During early high-speed testing at the Pirelli Nardo test track the engineers encountered issues with aerodynamic stability, hardly surprising in a Bentley with 50% more power than the Eight, its naturally aspirated stablemate. These were resolved by a deeper front air dam that gave 7 per cent less drag and 15 per cent less lift at speed. The Turbo R was a major sales success for Bentley. A nine-month waiting list proved that Bentley’s renaissance as a high-performance marque was long overdue. 4,111 examples were built during its nine-year production run.

The Heritage Collection’s Turbo R is a 1991 model in Brooklands Green with a yellow coachline. The interior is trimmed in Magnolia hide with Spruce piping and Burr Walnut veneer. Its specification includes anti-lock brakes and fuel injection (both were introduced in 1987), slimmer sports seats and a higher final drive ratio. It joined the collection in 2021. 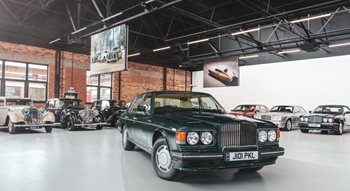 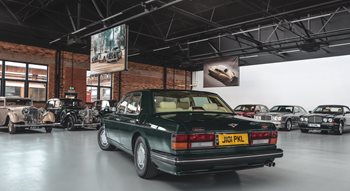 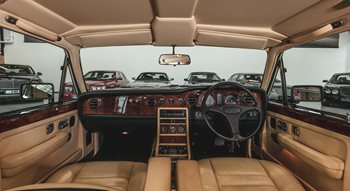