(Crewe, 15 July 2022) Bentley Mulliner has created a unique collection of new Bentleys to celebrate the 20th anniversary of the British marque’s presence in China. Each of the four special models has been inspired by a famous location in London, where W.O. Bentley founded Bentley Motors in 1919.

Mulliner’s considered design and meticulous handcraftsmanship have been applied to the Continental GT, Continental GTC, Flying Spur and Bentayga to create the four families of cars within the collection, with each one numbered as one of 20 to denote its exclusivity.

The four models – The Guard, The Carnaby, The Pall Mall and The Savile Row – introduce unique designs, embroidery and Mulliner features that characterise the cars and celebrate their iconic London muses. 20 cars in each family are due to be individually handcrafted by Mulliner, and all are destined for Chinese clients.

The first car in the collection is The Guard, inspired by the famous Royal Guards who protect the Royal Household. St James Red pearlescent paint with a Beluga roof mimic the red tunic and 18” black bearskin hats worn by the Guards. The bodywork is complemented by 21” ten-spoke wheels, painted black but with a bright machined finish, and a carbon fibre Styling Specification body kit (front splitter, side sill extensions, rear diffuser and boot lid spoiler) also painted in Beluga but finished with a Moonbeam pinstripe. Subtle ‘The Guard’ exterior badges in black, denoting the car as one of 20, adorn the front wings.

Inside the cabin, a bespoke three-tone colour split in Linen, Beluga and Hotspur is completed by Beluga lambswool rugs. Veneers match the leather, being finished in Piano Hotspur over Piano Black, demonstrating Mulliner’s ability to paint wood veneer to match any interior hide or exterior paint hue. Contrast stitching and piping add the final accents of colour.

The gold tunic buttons of the Guards’ uniform are reflected by Gold Organ Stops to control the cabin heating, ventilation and air conditioning system, while the speakers of the Bang & Olufsen sound system are finished in black and gold to match. Headrest embroidery, an overlay to the passenger fascia and bespoke treadplates all carry The Guard graphics.

The Convertible model in the collection is The Carnaby, based on Carnaby Street in London’s Soho district. Known for its energetic and lively atmosphere and bright colours, Carnaby Street has inspired an equally vibrant Bentley available in four different colours – Radium, Jetstream II, Orange Flame and Onyx. 22” wheels are black-painted and then finished with a solid white (Arctica) accent, which is matched by an Arctica pinstripe to the Styling Specification body kit. The Carnaby badging is fitted to the front wings.

Inside, bespoke Radium hide accents and matching contrast stitching in both Radium and Silver bring a splash of vibrancy through Beluga leather, along with a colourful diamond motif set into the passenger fascia, that represents the four colours in the family.

In 2002, the same year that the first Bentley was sold in China, Bentley delivered a new State Limousine to Her Majesty The Queen, in celebration of her Golden Jubilee. 20 years later, the car is still the official State Limousine of Her Majesty, and often seen on formal and state occasions.

The Pall Mall Flying Spur is a 2022 homage to the State Limousine, featuring bespoke duo-tone Beluga over Claret paint with matching 22” ten-spoke wheels in a claret-painted and bright-machined finish. Exterior bright chromework and a “The Pall Mall” badge to the C-pillar complete the regal exterior.

In the four-seat cabin, a bespoke and unique front-to-rear colour split separates the rear seats from the front, flowing from Imperial Blue in the front to the bespoke hide colour of Baroda Blue (colour-matched to the hide in the State Limousine) for the rear seats. A full length centre console separates the two rear seats. The veneer uses one wood species with two different finishes – Open Pore Burr Walnut over High Gloss Burr Walnut, for a beautiful combination of pattern and texture. The rear doors are finished with Burr Walnut, while the backs of the front seats house picnic tables finished in Piano Baroda Blue.

The finishing touches to the cabin include bespoke micro-piping in Pale Gold, contrasting with seat piping in Imperial Blue. A bespoke crown motif is embroidered to the seats, and the rear seats include loose leather-trimmed cushions. The crown motif is also repeated as a veneer overlay in Gold to the centre rear console, the passenger fascia and the rear door panels.

The final car in the collection is The Savile Row – a Bentayga that uses the world-renowned home of tailoring as its inspiration. Traditional tailoring materials are given a modern twist, with a design that pays respect to the craftspeople of Savile Row.

Clean Cumbrian Green bodywork is twinned with 22” ten-spoke wheels, Cumbrian Green-painted and with a bright machined finish. Inside, the four seat cabin with rear centre console uses a beautiful bespoke colour split in Cumbrian Green and Portland hides, with carefully selected areas of contrast stitching. Mulliner’s ‘Serenity’ seat quilting to the seats, doors and backboard is complemented by bespoke and exclusive High Gloss Burr Elm veneer on the fascias, centre consoles and door waistrails – the first time this veneer has been used in a modern Bentley.

Embroidery showing a suit and bow tie is stitched to the headrests, while the special model is also denoted by an overlay in the passenger fascia and by bespoke treadplates, along with exterior badging to the D pillar.

The 80 cars of this special collection will be sold exclusively in China over the coming months, with the first examples due to make their global debut in China shortly. Customer demand for these unique examples of Mulliner’s incredible design and artisanal handcraftsmanship skills is already extremely high. 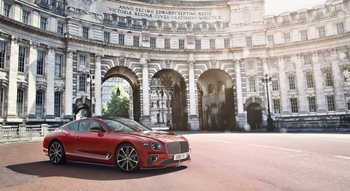 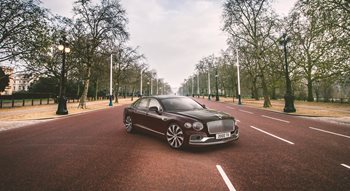 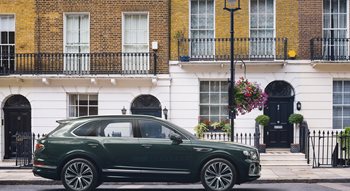 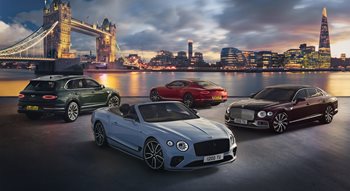 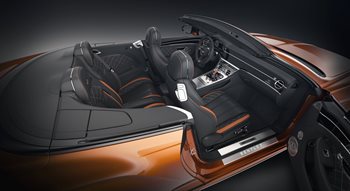 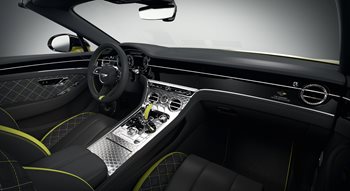 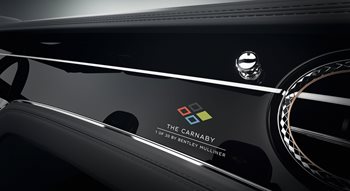 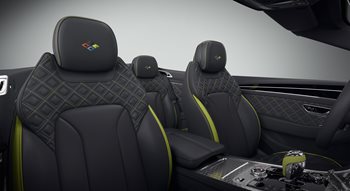 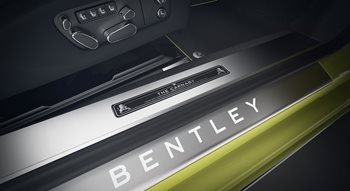 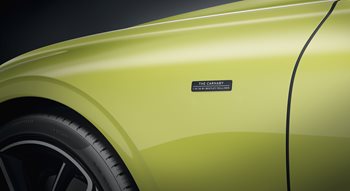 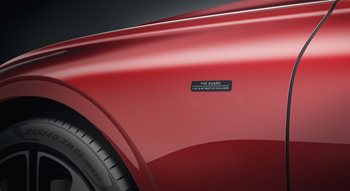 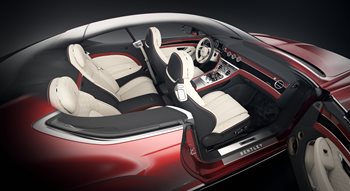 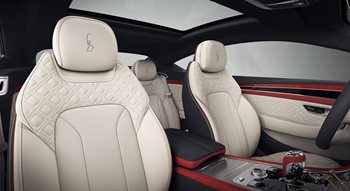 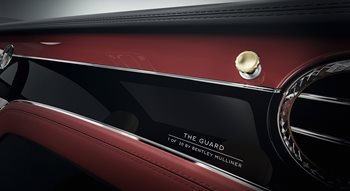 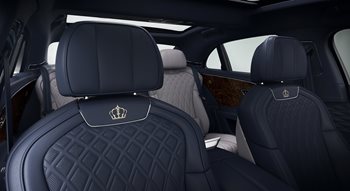 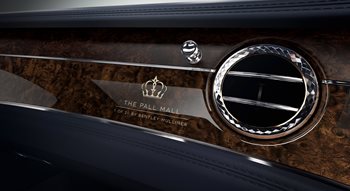 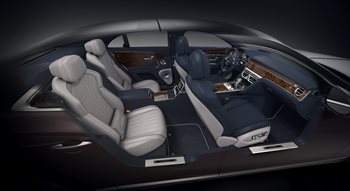 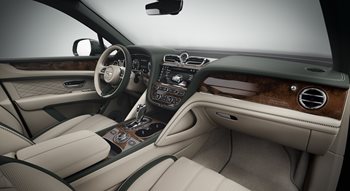 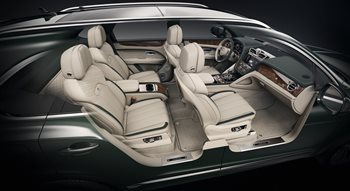 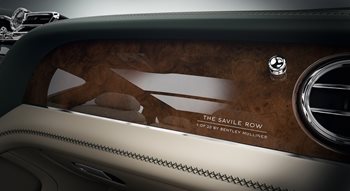 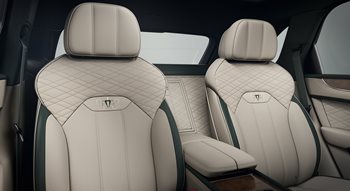 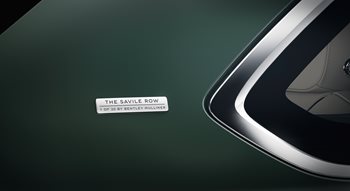 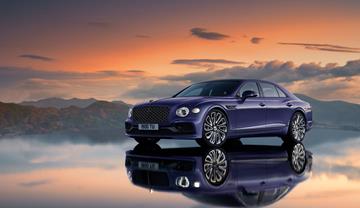