(Crewe, 1 September 2022) The Bentley Mulliner Batur will make its UK debut on 2 September at Hampton Court Palace for the 10th anniversary of the Concours of Elegance. The newest coachbuilt project from Mulliner was first unveiled at Bentley’s Signature Party at Monterey Car Week in California just 11 days ago, and embodies the start of a design revolution for Bentley.

The Batur will be the most powerful Bentley yet, with a 740+ PS version of the iconic, hand-assembled 6.0 Litre twin-turbocharged W12 engine that has metaphorically and literally powered Bentley’s success for the last two decades. As the engine enters its twilight years as part of Bentley’s Beyond100 transformation journey to being fully electrified, the Batur forms the first part of a celebration of the W12’s extraordinary power, torque and refinement.

Bentley Mulliner will also be showcasing the Blower Car Zero, the development car for the 1929 4½ Litre supercharged ‘Blower’ Continuation Series, alongside a Continental GT Mulliner Convertible. As Bentley’s in-house bespoke and personal commissioning division, Bentley Mulliner now operates a trio of portfolios to deliver exceptional craftsmanship across the Bentley model range and beyond.

To celebrate the tenth anniversary of the Concours of Elegance, previous winners of the coveted Best in Show crown have been welcomed back. This includes the 1930 Bentley Speed Six ‘Blue Train’ that took home the Best in Show prize in 2013. With its raked coupé body, designed and built by coachbuilder Gurney Nutting, and 6½ Litre Le Mans-spec engine, it was capable of nearly 120mph.

The car rose to iconic status and gained its nickname after then Bentley Chairman Woolf Barnato raced the famous Blue Train north through France, following a bet. Despite the absence of autoroutes, Barnato convincingly beat the train, making it to London before the train pulled to a halt at the station in Calais. Barnato covered around 700 miles at a remarkably fast pace, averaging 69 mph on the dusty, uneven roads. He took delivery of a Gurney Nutting coupé shortly after the adventure, and the car became associated with his exploits – becoming known as the ‘Blue Train Bentley’ as a result – despite not being the car in which he completed the race.

Over 50 Bentleys will be judged as part of a specific event for the Bentley Trophy on the last day of the event that will include a 4½ Litre Vanden Plas Open Tourer that was once owned by a founding member of the Bentley Driver’s Club.

A new design language for Bentley

The design of the Batur is the work of Bentley’s Director of Design, Andreas Mindt, and his team including Head of Exterior Design, Tobias Suehlmann and Head of Interior Design, Andrew Hart-Barron. The new form language defines a new chapter for Bentley design, as part of Bentley’s Beyond100 transformational journey to become the world’s leading sustainable luxury mobility company.

“For any design team, the chance to redefine our own rules is the most exciting challenge. We have reimagined the Bentley design language, keeping some continuity to the past and present while also drastically changing key elements.

“The design of a modern Bentley should always be potent, inspirational and harmonious. The form has to be strong and muscular whilst remaining graceful – there must be both elegant flow and muscularity. The term we use is the “resting beast stance” – picture a lion or tiger, laying low in attack position in long grass. That powerful shape – of ultimate power at rest, that looks fast even when stationary – is one that drives our new interpretation of the classic Bentley power line and haunch.

“A mark of power and prestige has always been a long bonnet. Our new design cues include a line that stretches from the bonnet along the whole length of the car, connecting the bonnet into the body, making the car long and lean and giving an elongated proportion to the front end. We call this feature the “endless bonnet”, and it’s the only accent highlight to the cleaner shape. Meanwhile the visual mass of the car is moved rearwards, giving the impression that the car is sat on the rear axle, which adds further depth to the haunches.

“At the very front of the car, we’ve modernised the famous Bentley grille and made it lower and more upright, to give a stronger face and a more dominant stance. This upright elegance brings self-confidence with a luxury stance. The grille is flanked by a new headlight shape and design, an evolution of the design used on Bacalar and maintaining the single large headlight either side. These are matched with all-new tail-lamps at the rear, that sit either side of a deployable spoiler.

“Overall, the form is cleaner and simplified, and we rely more on curvaceous surfaces bisected in the right places to reflect light and dark and bring more muscle to the design.”

Few cars embody the glamour, speed and power of the pre-war Bentley era better than the ‘Blue Train’ Bentley Speed Six, which was built after Bentley Boy and Chairman Woolf Barnato raced and beat the famous “Le Train Blue” northwards from the Côte d’Azur to Calais. His achievement was so exceptional that a 2015 re-run by Car Magazine in a Continental GT3-R only just managed to beat Barnato’s average speed set in 1930.

For years the Bentley that beat the Blue Train was thought to be a Speed Six coupé built by coachbuilders Gurney Nutting. Certainly, the Bentley chairman did own the car; and it was the Gurney Nutting coupé that contemporary artist Terence Cuneo depicted in his famous painting of the duel.

The low roofline and 2+1 cockpit with a single ‘side-saddle’ rear seat gives it a lean, low and purposeful profile; this unique design was cited by Bentley’s design team as one of the inspirations for the modern-day Continental GT.

But recently Bruce McCaw, current owner of the Gurney Nutting Speed Six, uncovered evidence that it was not finished until after the date of the drive. Historians now believe that Barnato, who owned a stable of Bentleys, raced the Blue Train in his Mulliner-bodied four-door Speed Six saloon, not the Gurney Nutting coupé.

To put the controversy to bed, Seattle-based collector McCaw traced the chassis and engine of Barnato’s Mulliner-bodied Speed Six, and also located the bodywork on a different Bentley chassis. He reunited the chassis with its original bodywork and showed the restored Mulliner Speed Six alongside his Gurney Nutting Speed Six at the Pebble Beach Concours d’Elegance in August 2003.

Bruce McCaw accepts that it was probably the Mulliner-bodied saloon that raced the Blue Train, although definitive proof may never be uncovered. But the Gurney Nutting Coupé is still widely known as the Blue Train Coupé, and it remains one of the most iconic car designs in Bentley history.

The 4½ Litre filled an important gap for Bentley customers – by the late 1920s the 3 Litre model was becoming uncompetitive and the 6½ Litre model was deemed too complex. The 4½ Litre melded the chassis, transmission and brakes of the 3 Litre with an engine that was almost two-thirds the capacity of the 6.5, resulting in a refined, powerful, long distance sports car.

A total of 720 examples were built between 1927 and 1931, and in 1928 a Bentley 4½ Litre won the 24 Heures du Mans with Woolf Barnato and Bernard Rubin finishing one lap ahead of their nearest rivals in a Stutz Model BB Blackhawk. The car would form the basis of the supercharged Blower Bentley, of which 55 were built in period. The car being displayed at Hampton Court is DS3575, which once belonged to Johnnie Green, a founding member of the Bentley Drivers Club in the 1930s and a personal friend of W.O. Bentley.

Bentley Mulliner Batur shown is in a pre-production state. 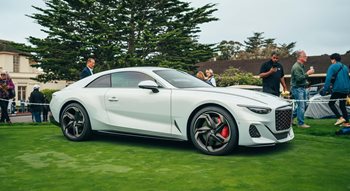 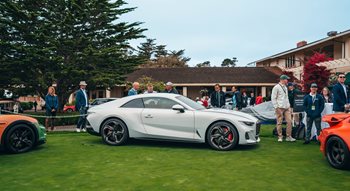 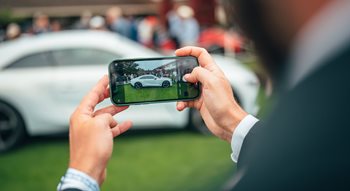 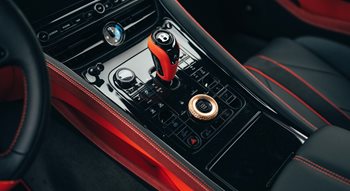 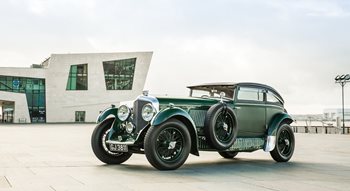 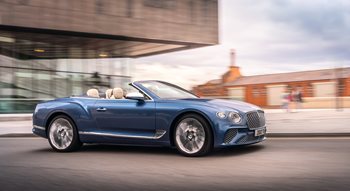 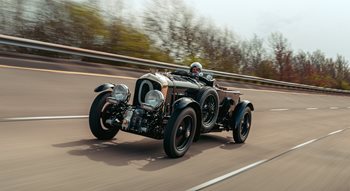 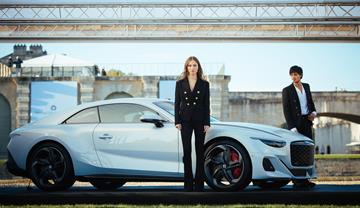 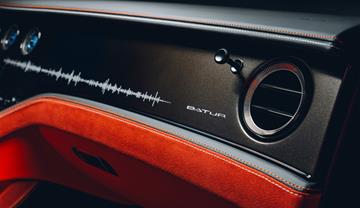 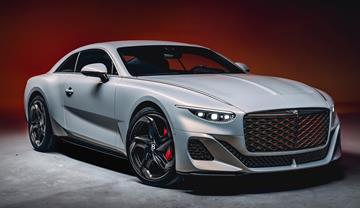