Designed, engineered and handcrafted in Great Britain, the Bentayga Speed is the most powerful and performance-oriented Bentayga to date. It builds on a long tradition of Speed models that was born with the Continental GT in 2007 and pushes the boundaries of Bentayga performance further since claiming the production SUV record at the gruelling Pikes Peak International Hill Climb last year.

With a top speed of 190 mph, the Bentayga Speed is our most powerful and performance-oriented variant to date.

Inside, the Bentayga Speed introduces a dramatic design theme. This includes elegantly crafted ‘swooshes’ around the door and door grab, on the edge of the seat cushions and backrest bolsters, and on the lower console; a new contrast stitching on the diamond quilting; discreet Speed badging; a Speed illuminated treadplate signature; and the use of Alcantara materials for the first time in a Bentayga.

As with all Bentaygas, the all-wheel-drive Speed is equipped with Electronic Differential Lock and up to eight Drive Dynamics modes. Bespoke engineering revisions to the Sport mode provide a more dynamic drive, while a greater exhaust character and firmer suspension tune further increase driver engagement.

Customers can personalise the Bentayga Speed to their own requirements with a range of exclusive options. Among them are carbon ceramic brakes, 22-way adjustable front seats with massage function, carbon fibre fascia panels, Bentley rear-seat entertainment (RSE) and mood lighting.

Bentayga Speed – The Pinnacle of SUV Luxury and Performance

The new model takes the Bentayga’s extraordinary abilities to new levels, boosting maximum power from 608 PS in the existing 6.0-litre W12 twin-turbocharged model to 635 PS (626 bhp) in the new Speed. Effortless acceleration is delivered thanks to 900 Nm (664 lb.ft) of torque.

The performance pinnacle of the Bentayga range, Speed is equipped with four on-road Drive Dynamics modes: Comfort at one extreme, and Bentley and Sport at the other, with Custom for customers who opt to create their own driving set-up.

Uniquely in the Speed, the Sport mode has been recalibrated to enhance response from the W12 engine and the eight-speed automatic transmission, as well as the suspension and Bentley Dynamic Ride. The effect is a more dynamic and engaging drive.

A greater exhaust character during start up and gear downshifts combines with a firmer suspension set-up to further enhance the driver experience. The Bentayga’s permanent all-wheel drive offers class-leading handling and go-anywhere ability, while powerful ceramic brakes are also an option.

The Bentayga Speed’s ceramic brakes are the largest and most powerful ever fitted to a Bentley, with a maximum braking toque of 6,000 Nm and engineered to withstand temperatures up to 1,000 °C. They also save more than 20 kg over iron brakes.

The Bentley Bentayga has been sculpted with an elegant, timeless execution. Now the SUV’s athletic stance has been amplified by the Speed‘s purposeful design with body coloured lower bodywork styling, body coloured front and rear bumper splitters and a striking tailgate spoiler. Discreet and elegant Speed signatures adorn the lower edges of both front doors.

The Bentayga Speed also features a body coloured screening panel underneath the lower front grille. Uniquely, the bumper and radiator grilles are a dark-tint matrix that enhances the model’s performance credentials.

Another signature feature of the Speed is the dark tint front and rear lamps. This is complemented by a new, 22-inch 10-spoke wheel design that is offered in three finishes – silver, dark tint or black, which is available for any customer who opts for Bentley’s contemporary Black Specification.

A Truly Luxurious and Unique Cabin

Handcrafted in Crewe, England, the Bentayga’s cabin is the epitome of modern British design. Bentayga Speed introduces a new colour split interior, specifically designed to highlight unique styling lines. Key to this is the use of Alcantara trim in a Bentayga for the first time.

Alcantara is a highly tactile cloth that is often the preserve of high-performance cars – it has previously been used by Bentley on models such as the Continental Supersports. According to preference, customers can revert back to leather as a no cost option on the Bentayga Speed.

The styling lines are highlighted by elegantly crafted ‘swooshes’ around the door and door grab, on the edge of the seat cushions and backrest bolsters, and on the lower console. Contrast stitching is available on all Bentaygas. In the Speed, this is extended to include the diamond quilting on the cushion bolsters, at the top of the backrest, on the door pads and on the backboard of any Speed specified with four seats instead of five.

While Bentayga customers have the option of the Bentley wings embroidered at the top of the seat backrests, on the new Speed models these have been replaced with the word ‘Speed’, in either blind or contrast stitching. A metal Speed badge adorns the passenger side fascia, while an illuminated Speed treadplate welcomes passengers into the truly luxurious cabin.

Go-anywhere driving ability and imperious luxury are the hallmarks of the Bentley Bentayga. Powerful, individual and exquisite in equal measure, the Bentayga is for those who demand luxury without compromise. 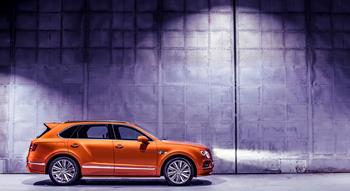 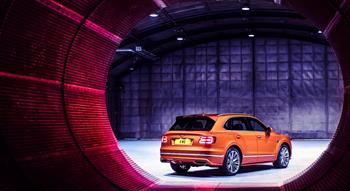 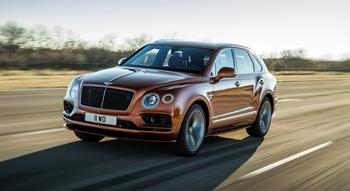 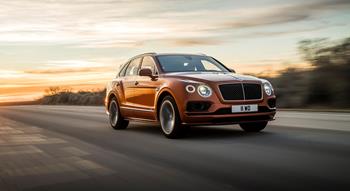 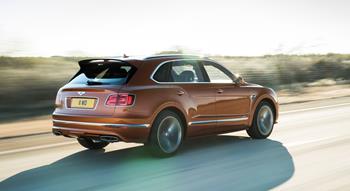 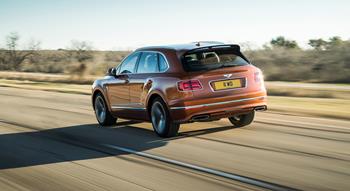 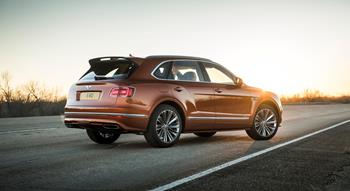 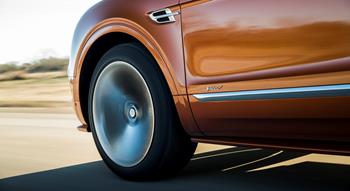 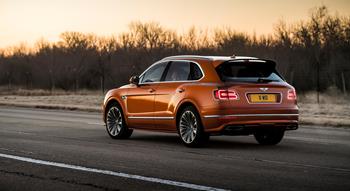 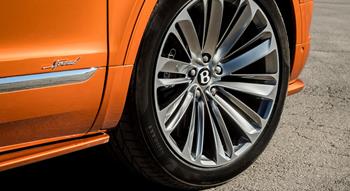 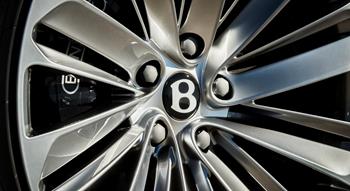 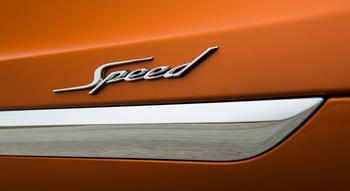 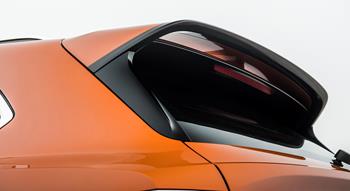 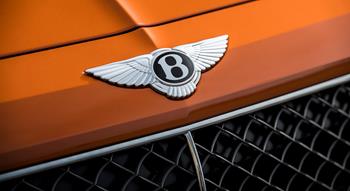 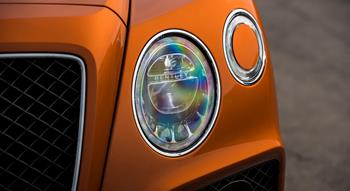 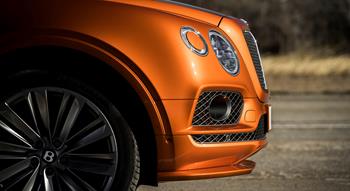 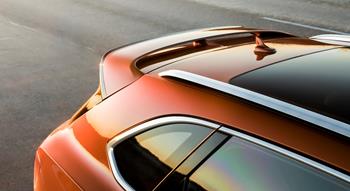 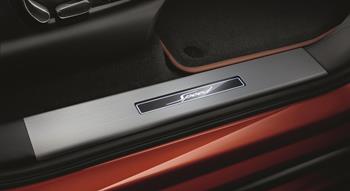 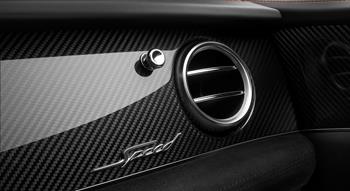 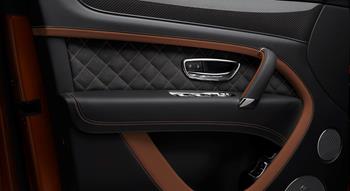 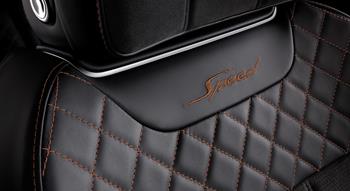 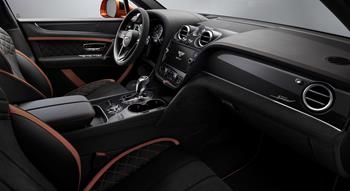 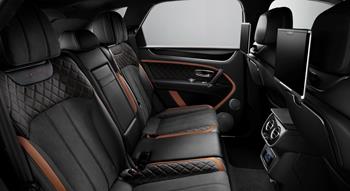 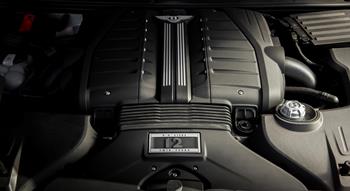 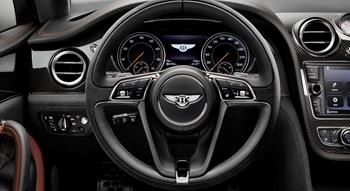 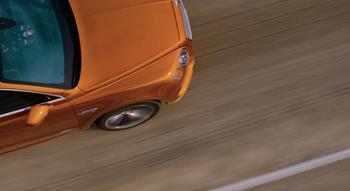 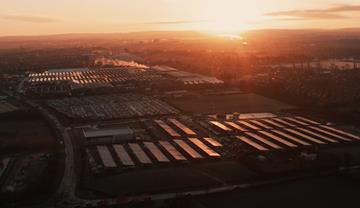 THE CRAFTING OF BENTAYGA SPEED - SHOWN FROM THE AIR